TOP 8 Shocking Moments in the 24 Hours of Le Mans 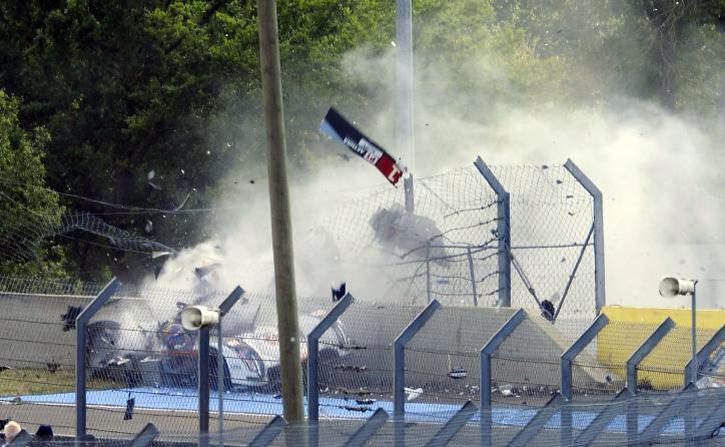 The 24 Hours of Le Mans is a true test of human endurance, and it will be happening tomorrow at 9pm GMT +8! However, no one is safe from high-speed crashes. Many have survived the perils, while others lost their lives in the process. To remind us of the danger of endurance racing, here are the TOP 8 Shocking Moments in the 24 Hours of Le Mans!

(I was thinking of doing ten, but I decided not to add more deaths in this list!) 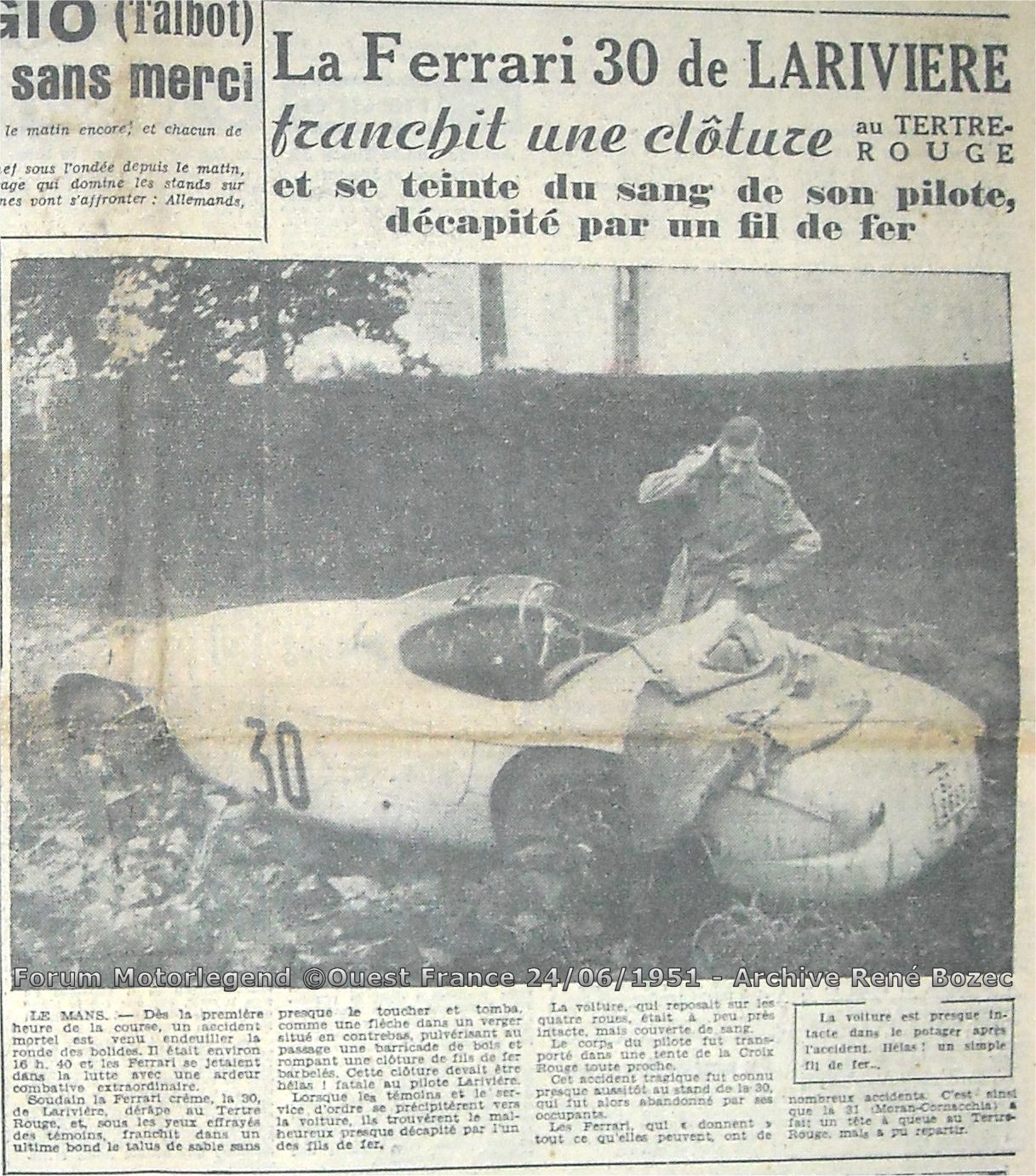 8. Jean Larivière (1951)
Normally, crashes lead to broken legs, spinal injuries, etc., but you don't hear the word "decapitation" in the reports...until 1951. Jean Larivière lost control of his Ferrari 212 Export C at the Tertre Rouge, jumped an embankment and hit a barbed wire fence. The worst part is that the wire sliced his head off killing him instantly. Gross!
-----
(YouTube link)
7. Loic Duval (2014)
Last Wednesday during free practice, Loic Duval spun his #1 Audi R18 at the Porsche Curves hitting the wall backwards at--God knows how fast was that--obliterating the rear end. Surprisingly, Duval was unharmed, apart from two scratches, as he got out of the wreckage! Unfortunately, the doctors told Audi that he is not allowed to race this weekend. Marc Gene would replace Duval on the grid.
Meanwhile, Audi began fixing the #1 R18 before the race starts.
-----
(YouTube link)
6. Anthony Davidson (2012)
It was Toyota's debut in Le Mans, and it didn't go well. Pierguiseppe Perazzini of AF Corse Ferrari clipped the #8 TS030, driven by Anthony Davidson, in the Mulsanne Corner sending the Toyota up in the air. Davidson only recieved two broken vertebrae.
-----
(YouTube link)
(YouTube link)
5. Mark Webber and Peter Dumbreck (1999)
Before becoming Red Bull neglected driver, Mark Webber raced in Le Mans for Mercedes-Benz, and it seemed that he had wings before Red Bull. In the Mulsanne Straight, the Aussie Grit's #4 Merc CLR flew twice, one during qualifying and the other in the warm up lap. Five hours later, Peter Dumbreck in the #5 CLR met the same fate as with Webber. These two incidents forced Mercedes to leave sports car racing for the second time.
-----
(YouTube link)
(YouTube link)
4. Allan McNish and Mike Rockenfeller (2011)
It seemed that Ferrari and Audi had a rough feud back in 2011. First off near the Dunlop Bridge, Allan McNish in the #3 R18 clipped Anthony Beltoise's #58 Ferrari 458 Italia causing both cars to spin towards the spectators. Thankfully, no one was hurt. While McNish had to retire, Beltoise was able to rejoin the race.
Eight hours later, Mike Rockenfeller in the #1 car collided with the side of another Ferrari, this time #71, after trying to overtake at the high-speed section between Mulsanne and Indianapolis. Again, no one was hurt.
-----
(YouTube link)
3. John Woolfe (1969)
Have you wondered why the traditional Le Mans start, where you run to your cars and drive off, was never used in the present day? This man was the reason why. John Woolfe ran to his Porsche 917, start the engines and off he went...without fastening the seatbelt. He lost control at Maison Blanche hitting the barrier and caught fire, and the terrible part was that Woolfe was thrown out of the car upon impact.
Before the race, Porsche wanted Herbert Linge, the company's experience 917 driver, to start first, but Woolfe wanted his family to see him first, fearing that he might not be seen later on from a possible early retirement. He did have his 6 minutes of fame, and it's gone.
-----
(YouTube link)
2. Allan Simonsen (2013)
Since 1997, no one died racing in Le Mans, but in 2013, Allan Simonsen spun his car at Tertre Rouge and crashed into the barriers. The impact caused the roof to crush injuring Simonsen. He was still conscious when the medics removed him, and they took hm to an on-site clinic where he later died from his injuries.
-----
(YouTube link)
1. Pierre Levegh (1955)

1955 was the year that change the course of the 24 Hours of Le Mans. On Lap 35, Mike Hawthorn in the Jaguar D-Type was unexpectedly called to go to the pits for fuel. Lance Macklin in the Austin Healey 100 didn't see the Jag braking so soon that he swerved across the road to avoid making contact with Hawthorn. However, Macklin didn't notice that Pierre Levegh and Juan Manuel Fangio, both in Mercedes 300 SLRs, were behind him.

Unaware of his surroundings, the Healey's rear end touched Levegh's Merc causing him to go airbourne at 150 mph. Soon, the car hit the barrier throwing out parts, debris and even the engine block into the spectators. Levegh was thrown out of the driver's seat crushing his skull. Magnesium parts caused the fire to burn quickly and killed more. A total of 84 bodies, 83 from the crowd and Levegh, were counted from the death toll.

Don't let these accidents from the past cover up the excitement of this weekend's race. Throughout the years, the Automobile Club de l'Ouest have improved La Sarthe to make sure no one flies off the road, and manufacturers have improved their safety to make sure the drivers' heads are safe.

To everyone watching the race, I'll be up when France is nighttime.

Hope you enjoyed this TOP 10 FRIDAYS ,or in this case, TOP 8 FRIDAYS! Remember...

Reply cheap couple necklaces
8:11 PM on August 3, 2018
This post is truly a fastidious one it helps new the web people, who are wishing in favor of blogging.

Reply Michaelapary
9:48 PM on October 11, 2017
http://cialisnewpilles367.com - what are thyroid and parathyroid glands
, hello and buy!, hello and buy!